Tripawds Supporter sites have no ads!
Skip to content

Tripawds is a user-supported community. Thank you for your support!

I wanted to share some pictures of Samba over the last month or so! Our sweet kitty is back to herself and more affectionate than ever. She still enjoys the privacy of our master bedroom sometimes, but seems to be feeling well enough to also enjoy our company in the rest of the house. Her appetite has also increased significantly and she is gaining back the weight she lost. We are so happy she is so healthy at this point!

One big reason I wanted to post besides updating my friends, is to offer my kitty onesies that I made before her surgery. I would happily send these to anyone whose cat is about to undergo left front limb amputation. I lost so much sleep over this whole ordeal and I would love to save somebody a few hours of making shirts! 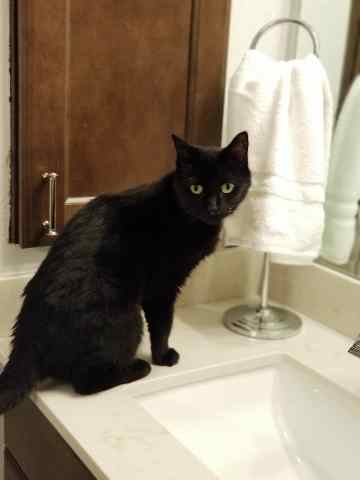 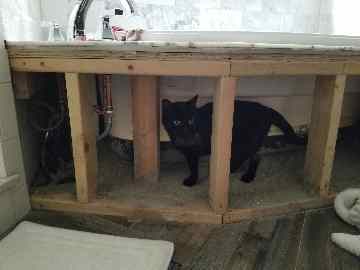 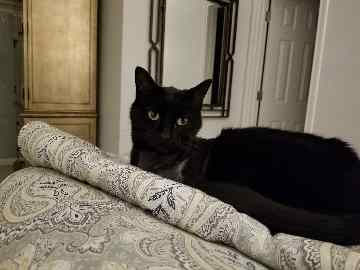 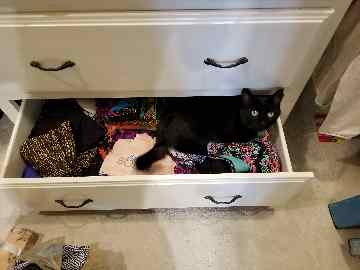 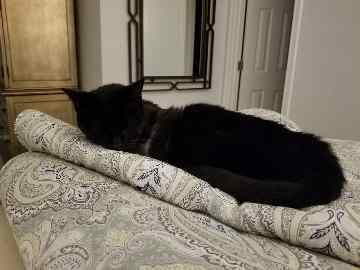 To remove ads from your site and others, upgrade to a Tripawds Supporter blog!

Tripawds is a user-supported community. Thank you for your support!

Wow, these past few weeks have felt like months! I feel like we’ve been functioning like a little hospital house, with all the special accommodations we made for Samba’s convalescence. All her own things in her own little room, keeping her safe and sheltered and confined, medicating her for pain and then for constipation and then for diarrhea and incontinence (arrgh!). Surrounding her with love but also respecting her need for space. Alternately cringing and cheering for her new steps and growing confidence. Allowing the children to coddle her but also cautioning them to be careful. Now, finally, we have unbolted the door and Samba is allowed to go throughout the house. I am back to sleeping in my own bed and it feels so strange to lie more than 8 inches off the floor and without the smells of litter box and canned cat food enveloping me, after so many nights on my “hospital pallet” near her.
Our new project is providing Samba the seclusion she wants (she’s kind of an old lady sometimes) by giving her the only “kitty key” to the downstairs master area. My husband put in a sensor-operated cat door to our bedroom so that pesky little Sassy kitten cannot enter! That just got installed tonight, so she has not tried it out yet (hopefully she will be able to operate it; she is doing fine with the regular cat door to the garage). Samba wanted to take some glamour shots in her new palace (SUCH an upgrade from her “hospital room”) to show y’all that she is feeling almost back to normal.
Thanks for those of you who came alongside us about the chemo decision. We are feeling comfortable with the good chances she has from the surgery, even though not 100% – because really, nothing is. The good Lord knows how much time she has and has protected her thus far, so we are just going to enjoy it and praise Samba for her determination and unswerving love. I have to be honest and say, though, despite nursing her through this so closely – I often still find her post-surgery physique surprising to look at. It catches me off guard, and the fleeting thought goes through my mind, “Wait, where did her leg go??” Does this happen to any of you?
I will tell you what the best thing has been, that has comforted me ever since her surgery: She Never Stopped Purring. 🙂

We love you all and will keep in touch!
Team Samba
Texas 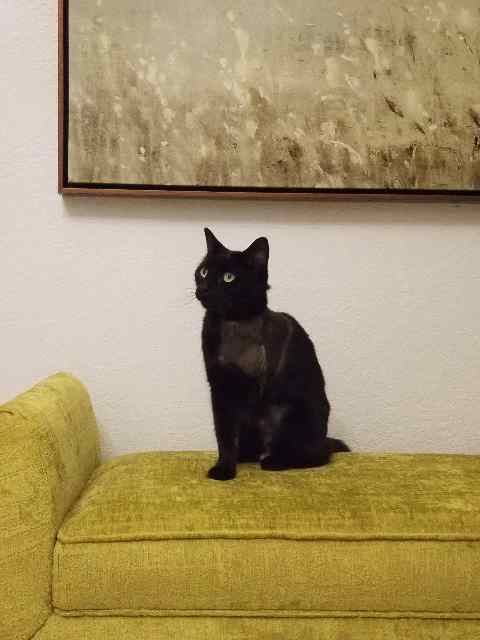 New look for a new room 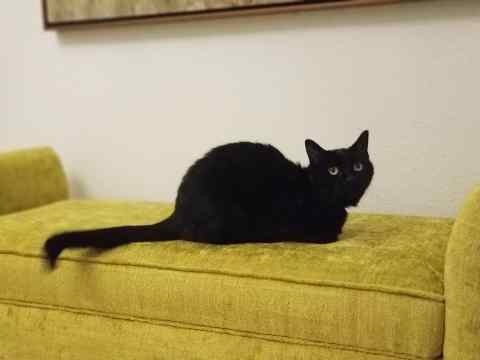 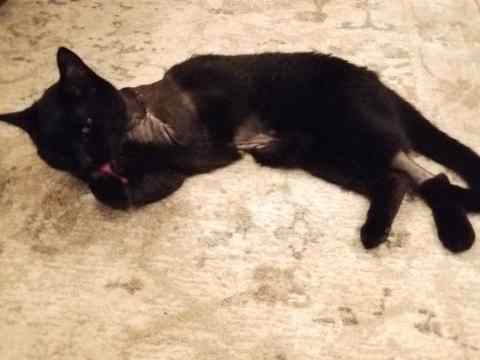 Feels so good to be out in the living room! 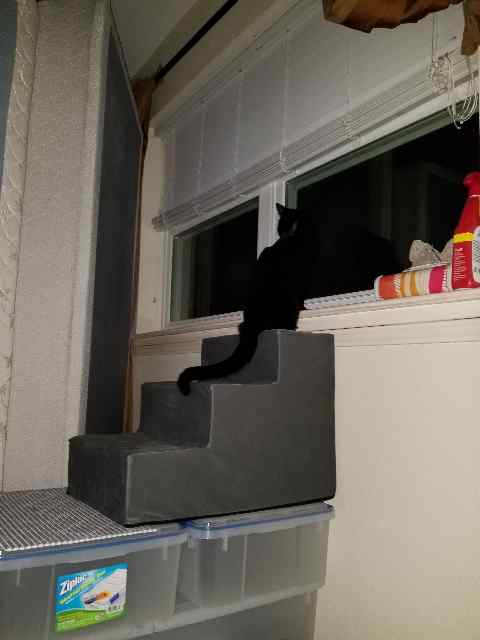 Her own personal set of stairs for her hospital room. This was after she no longer needed her little cave bed and we re-organized a little for week 3.

Today I had a phone call with Samba’s oncologist. He reviewed the pathology from her amputation in which the most narrow clear margin was 5 mm. This is really not all that good of a margin, and he admitted that it worries him some. He recommends we consider chemotherapy with doxorubicin to improve her chances of the cancer remaining gone, both locally and systemically. This medicine causes no side effects in 95 % of cats, but a few will experience nausea, vomiting, or diarrhea. She would need five infusions three weeks apart at about $500 each. So, this is a decision my husband I will need to focus on soon. They do not begin it until 2 weeks after surgery, which would be next week. Have any of your pets taken doxorubicin?

Here are some nude photos of Samba 😉 ! She is healing well at the incision site! 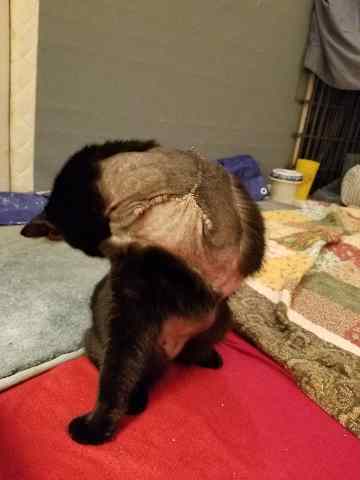 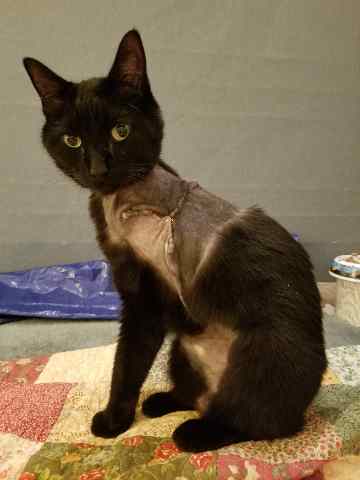 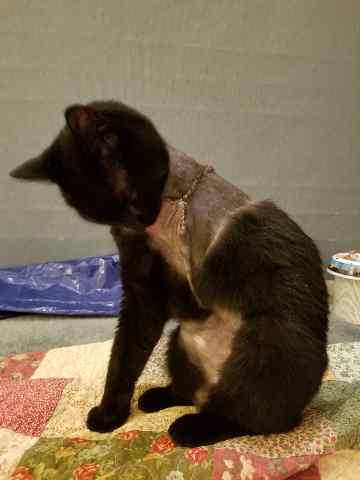 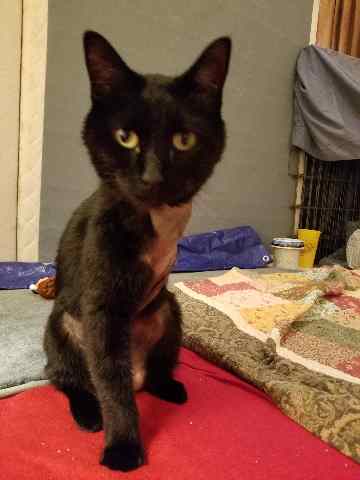 Here are some one week post-amputation highlights! I got good advice from Kerren and Holly on the Tripawds group to try to relieve Samba’s boredom and give her a change of scenery. It was refreshing for me, and hopefully for her, that we were able to go outside for a little bit this afternoon in the fresh, rain-washed air. I carried her in a soft white blanket and held her in my lap in the front porch rocking chair, and also walked around the driveway with her while my kids rode their bikes through puddles. She was alert and looking around at times, but also felt comfort in hiding her head under the blanket when she got overwhelmed by the sunlight and the ambient noise.

Yesterday I received the news about her histopathology result from the amputation. They found residual cancer in the specimen surrounding her initial excision site from July, but the new amputation margins were clear. They were clear by only 5 millimeters in one area, however. This was okay, but not as victorious of a result as I was hoping for. I should be having a phone call tomorrow with the oncologist to hear their opinion. I pray that there is no single speck or cell of cancer left! I know miracles are possible!

Our latest struggle has been incontinence, with small stool droppings appearing in Samba’s resting spots. She had a little of this chronically pre-surgery due to an old pelvic nerve injury from a possible car collision which resulted in multiple fractures and temporary paralysis (long since healed other than occasional, dry “poop nuggets” we find in the house). However, the rate of droppings has picked up significantly in her convalescence. I think it may be that her bowels are so full that there is a bit too much overflow and her damaged pelvic nerves aren’t holding it all in. So, we are resuming the Miralax and hoping it brings on some more productive stools that end up in the litter box! Sorry if TMI!

Samba continues to be loving and calm. I am still staying with her in the guest room and loving this extra time with her, especially since she had grown distant after we acquired a kitten last Christmas. Renovation construction on our flood-damaged master bed/bathroom downstairs should wrap up soon, which will get the whole family back in order more. I plan to put a sensor-operated kitty door on the master suite entrance so that only Samba, and not the kitten, can get in. Samba is getting older and will need some continued personal space, even once surgery and recovery is far behind her!

Question: When did y’all feel that your cat actually seemed and looked proficient at walking again? What do you think helped the most with him or her improving in that area?

Thank you for all the love you share! We feel it daily! No new pics (I wanted to document our porch excursion but would’ve had to disturb my little furry bundle to go get the camera) so here is an older pic of Samba. 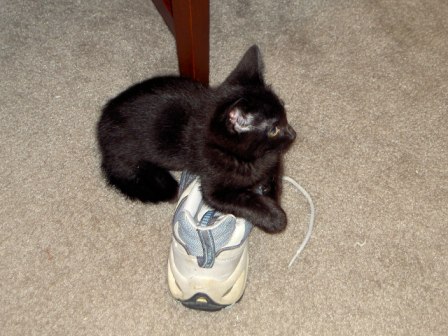 Thank you to all of you who have reached out in support of us. Samba had her left front leg amputation surgery for injection site sarcoma 5 days ago and everything is still very stable. We have had no problems whatsoever with the incision, or with med intake thanks to the irresistible morsels pictured below. Our days are fairly homogenous. I spend a lot of my time here in the guest room with her, reading and resting on a mattress on the floor. Samba rotates her naps among the mattress, which she can already climb up on, her little orthopedic pet bed, or the quilts on the ground. She will become alert for a little while for petting or for food. She is not falling quite as pitifully or drastically as before when she walks. She is happy to go back to sleep after a few minutes and purrs as I pat her head and ears. Her digestion process is fully intact after a few small sprinkles of Miralax. We have had almost no complaining from this girl! She fussed at me one time when I changed her shirt, but otherwise is all purrs. She seems even sweeter and more content than before her amputation, as she had gotten to be a bit of a grump. Now, she is back to her sweet self. I am loving all the time with her.
We have run out of buprenorphine and Onsior, but have gabapentin remaining. I hope it is okay to be on monotherapy now for pain control.

Coming up this week:
Will call surgeon on Tuesday as instructed, one week post-op, to see if pathology result is known. Will make suture removal appointment for Friday.

Word of caution:
Not all cats can tolerate kitten replacement milk! I offered this as a treat and it didn’t stay down in her stomach long! I woke to the tell-tale sound of hurling! We will stick to kitty bisque and canned food! 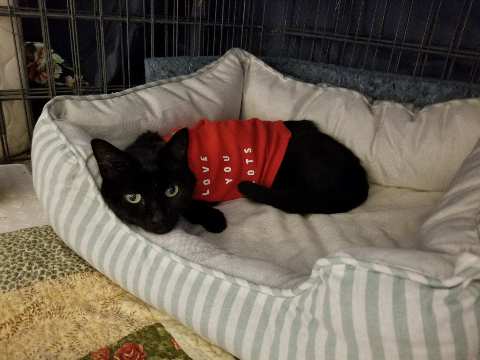 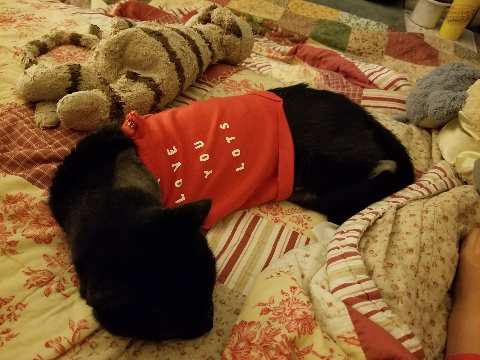 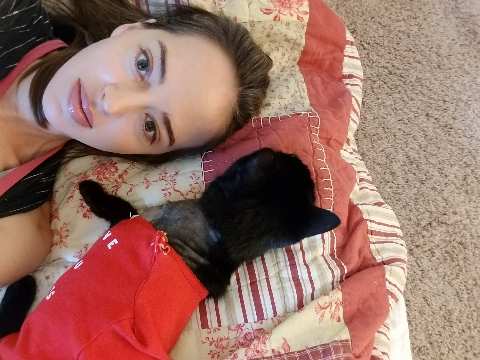 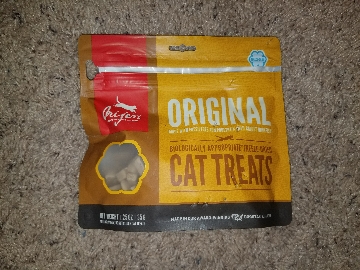 Just smush one of these yummy morsels around kitty’s pill, and she will swallow it whole! 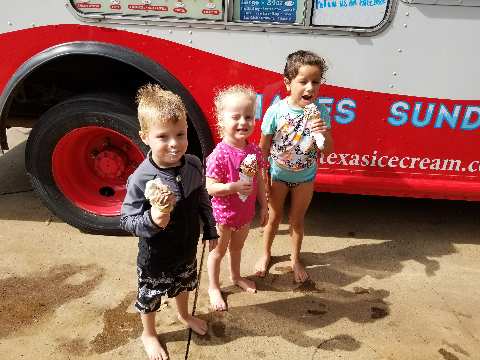 My family and I went across the street to a pool party after I tucked Samba in for a spell. I have to say I was a little nervous to leave for those few hours, but she did fine (This was just yesterday). 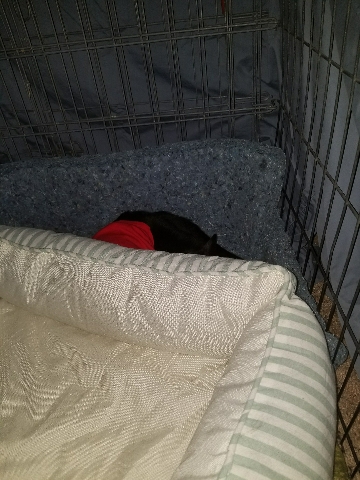 While I was blogging, Samba decided to hide! I was halfway into a panic, waving my flashlight around looking for her, when I discovered that she was just trying out the space behind her bed.

About Your Tripawds Blog:

New Tripawds Bloggers: Please review your default first blog post at left for lots of helpful links for getting started with your blog or review the Help Videos in your dashboard. Edit these widgets from your Appearance settings to remove this notice, upload a custom header photo, or choose from 130+ themes, and much more!


Tripawds Supporter sites have no ads!